Install this script?
Ask a question, post a review, or report the script.

Comics marked as read are partially faded out with a "READ" tag on the bottom right of that comic.
You can mark comics as read/unread on the main comic info page for that comic.

Lists of marked comics and subs is stored locally on your PC. That means if you wipe your locally stored data for the browser the list gets wiped. There is a barebones import/export for these in the settings if you wish to make a backup. To export, simply copy paste (CTRL+A is helpful) the data anywhere you wish to store it. To import, paste the data in to the textfield (make sure it's empty first) and press "Import". I'll make it fancier and a bit easier to use at some point.

All features are optional.
You'll find the settings in the site's own settings section: 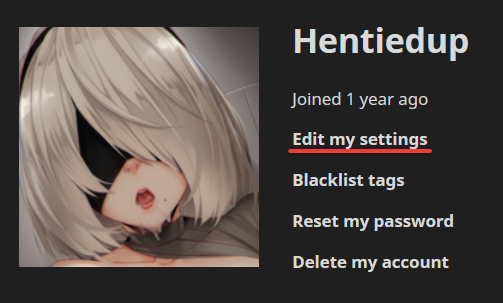 (tested and working on Firefox and Chrome)

v1.1:
- Now when using HQ thumbnails, the low quality thumbnails get loaded in first. As soon as the low quality image is loaded a HQ image starts loading to replace it. This way there's something to see as soon as possible as the HQ images do take some time to load.
- Because of above improvement, HQ thumbnails are now on by default everywhere

v1.2.1:
- Fixed bug: mark as read/unread buttons stopped working after one use unless the page was refreshed in between

v1.2.2:
- Fixed a mistake with the mark as read array. Should be working now.

v1.3.1:
- Cleaned up the code a bit.
- Made the read tag more visible
- Added option to set how faded out the read comic covers are.
- The comics marked as read also no longer have the title portion faded out.

v1.4.2:
-Added barebones import/export (currently the marked as read and subs only, not the settings)

v1.4.4:
-FIXED: subscribe button did not appear if you ordered the artist comics by "popular"

v1.4.6:
-FIXED: comics marked as read weren't being shown as such on the artist or group pages

v1.4.7:
-simplified the system for fading of marked as read comics. The title is now (again) faded as well.