Lemio
§
Posted:
Report comment
Thanks for the script. Small fitback.
The market timer starts only when the "market info" option is enabled. I don't need information there, but I need a timer, it's inconvenient to turn it on and off every time, I would like it to work independently.
New pandora witch girls are not displayed.
And one more thing - all timers and links stopped working on the test server. Apparently the code was changed there and everything will be transferred to the main server on Wednesday.
Tom208Author
§
Posted:
Report comment
Thanks for the feedback.
For the market timer, I think I know how to fix this but I have to do some tests before.
For new Pandaora witch girls, you're right. I fix it right now.
For test server, I saw that issue yesterday evening. I have to understand what are the changes made by Kinkoid. I hope to be able to fix this problem before Wednesday.
Lemio
§
Posted:
Report comment
You are just some kind of magician. I'll just think about what it would be nice to do, but after 10 minutes the script was updated and it's already done. Thank you very much.
The only Wishlist that I still tried to persuade Shal to do, but he never did, is that the tower would display the rating not only in the list, but also before the start of the battle when the player is already selected, well, on the screen where the judge is sitting. Not that it was critical, but I would like to do this, if, of course, it is possible.
Regarding the test server, then there is a problem on the part of the KK, that they messed up there themselves. The replenishment of kisses is buggy (there is always 10 hours), the game freezes when trying to buy tickets for energy. In short, I suspect that they broke everything there themselves and when they fix it, the script will work again.
Tom208Author
§
Posted:
Report comment
About the rating on the page before the start of the battle, I'm pretty sure it is possible. I will do that as soon as I have some time ;-)

For the test server, they change the name of some variables used by the script, so the current script don't work anymore. But, I have already prepared a new version of the script that works. I will release it as soon as the changes arrive on the live server.

For an unknown reason, some players (like me) have colors and others don't.
I added something in the last version (0.19.8) about that. I don't know if it works, so please let me know if it is good or not.

I can see the colors after the last update. Thanks again.
Lemio
§
Posted:
Report comment
Thanks again for the script. Now I can't imagine how I could play without him, we quickly get used to the comfortable and good.
A small request - if possible, I would like the arrows in the places of power to be visible even if you disable the loading of images (yes, I do this because the browser processes all sorts of routine actions faster). The "hide / show" button in the tower is always visible, even if you do not load images. But, of course, all this is not critical at all and it works so well.
Lemio
§
Posted:
Report comment
And more. If none of the places of power is started, then the timer looks like this. Not critical, but "ugly".)

Thanks for your feedback.
I fixed the issue with timer of the places of power when none is started.
I also added real buttons for the arrows in the places of power. Like that they are always visible even if you disable the loading of images.

By the way, I can suggest an idea. I use the adblock to hide the "sell" button on the market after several times I misclicked and sold the necessary things. Perhaps it makes sense to add the option to show / not show the sell button on the market in the script, it would be more convenient than the ad block and would help those who do not use it. Moreover, it would be convenient to have such a button right in the market section, like a sorting button, so that you can quickly turn it on, sell what is unnecessary and turn it off again, and not go into the settings of the main page.
Lemio
§
Posted:
Report comment
A thousand thanks. Exactly what I wanted.
Tom208Author
§
Posted:
Report comment
You're welcome ;)
Lemio
§
Posted:
Report comment
Thanks for fixing the champions. But I got a little problem. Apparently, vision is already weak or on the monitor with color rendition something is wrong, but the color of the checkmark is the pose and matches (green) and the pose is, but does not match (yellow) are too similar in shades and I constantly confuse them. If possible, it would be nice to somehow separate them more strongly by color. Make green more saturated, and I would replace yellow with gray, it is more appropriate in meaning. An example in the picture.

Well, now, since we are talking about champions, I will write a few ideas that have arisen in my mind about them. There is nothing very cretistic, but as the saying goes, "it would be nice to have such a thing."

For a long time I wanted to somehow visually mark the poses in the list that coincide for the girl just at the champion himself. For 3 and 5, you usually remember because they happen more often, but for the rest you forget because they rarely fall out, only on phase 5 sometimes. And sometimes I confuse it with test servers where there is always one doggy pose. In general, it would be nice to somehow highlight them visually.

I would like the color differentiation on the champion card - the easiest way is to change the color of the inscription on the name of the palace. Green - the champion is available, but no battles have started with him (damage 0). Light yellow - available and battles have already begun. Orange - not available and the pause is less than 15 minutes. Purple - not available, timer is more than 15 minutes.

Well, the last thing I thought about - in the results of the battle, I would very much like to have an approximate forecast of the number of battles before victory based on the formula - divide the rest of the champion's hp by the damage in this battle. It is clear that this forecast may not be accurate, there are several factors that can greatly affect the result, but this can be written in the explanation something like "If the impression on the champion is the same as in your last battle, then it will be possible to win in about X battles"

Well, traditionally, thanks for the script, it helps a lot. 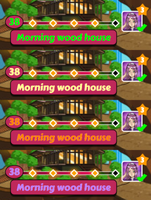